The Harlem GlobeTrotters are Celebrating 90 years 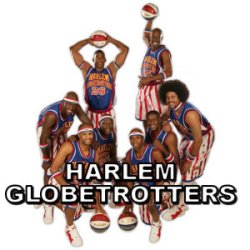 The HarlemGlobetrotters are on their 2016 tour celebrating their 90th year world wide . Serving up smiles, family entertainment with dunk shots, trick shots,  comedy among players, and ball handling like you've never seen any where else in an arena near you.  These guys will keep you entertained during the whole show and I guarantee you be laughing .
On the court, the Globetrotters' 90-year celebration will feature some of the greatest athletes and entertainers on the planet. With a star-studded roster featuring Big Easy Lofton, Ant Atkinson, Hi-Lite Bruton, Thunder Law, Bull Bullard and Cheese Chisholm -  plus female stars TNT Maddox and Sweet J Ekworomadu* 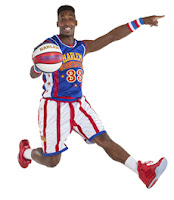 Bull Bullard # 33 , postion G Bull is 6' 4" tall and he's from Detroit, MI .
Bull is the Globetrotter that his teammates say spends the most time in front of the mirror. Maybe all that mirror time is so he can admire his collection of tube socks and shoes. For real, the man collects tube socks. You can get away with that kind of thing when you've nailed a perfect score at the College Slam Dunk Championship, like Bull has. And you can especially get away with it when you've done that AND made it to the finals of "American Ninja Warrior" and tried out with the New York Jets. Bull's earned his socks. Just don't ask him to read you his poetry.

Dizzy #2 ,  postion : Guard . He's 5'9" and From Detroit, MI
Detroit native Dizzy English played parts of three seasons in the NBA Development League after a solid college career at Cleveland State University. The 5-9 dribbling dynamo played the two years prior to his time at Cleveland State at Mott Community College (Mich.), where he helped lead the team to a 61-10 record over that span. 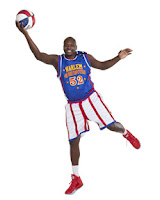 Globetrotters Showman Big Easy Lofton gets his nickname from growing up in.New Orleans and his easy-going nature, which is a trait that helped him thoroughly enjoy his three runs on “The Amazing Race,” with teammate Flight Time Lang. The duo finished as high as second place on the show. Big Easy is also a world record holder, owning the Guinness World Records® records for the farthest basketball hook shot (61 feet 4 inches) and the farthest blindfolded basketball hook shot (50 feet 3.5 inches). 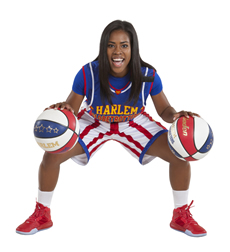 TNT joined a very elite group in the fall of 2011, becoming the first woman to don the red, white, and blue since 1993 - and her success opened the door for T-Time Brawner and Sweet J Ekworomadu to join the team over the following seasons.

The Globetrotters are like a family too, and TNT is honored to be a part of it. “Honestly, this means everything to me,” she says. “This team incorporates everything I love about basketball. Not only to play it, but to entertain, and to give back to the community. I've always dreamed of leaving a positive mark in basketball history, and this is the perfect opportunity to do so.”  Part of that positive mark came when TNT registered as an Adult Girl Scout, just another way she and her female teammates have found to inspire young girls to achieve great things.

Don't forget to  bring your camera for some amazing photos!

My readers receive 25% off Harlem Globetrotters Tickets to any game!  Use promo code FAMFUN for game dates, times and tickets please visit http://harlemglobetrotters.com/tickets

A Day In The Life Of A Globetrotter


watch more videos on their You Tube channel
https://www.youtube.com/channel/UC_HgtI1WieWXTJu-EWHGr9w?sub_confirmation=1

Jan 25th 7pm
for directions, map  and other events happening click on their link To get my discount of 25% off you can only use it at the link listed above in my post.
https://www.google.com/search?newwindow=1&biw=1248&bih=682&q=perani+arena+upcoming+events&revid=789886510&sa=X&ved=0ahUKEwilotKBhZPKAhWJOSYKHY0VCpA4ChDVAgh6KAA

Posted by Unknown
Email ThisBlogThis!Share to TwitterShare to FacebookShare to Pinterest